/ In the News / Prism Power – The Detroit Jewish News

Link To Brain Injury: Through their work with VH, the doctors discovered a link between traumatic brain injury (TBI) and vertical heterophoria. Mark explained, “TBI creates a bad or false signal between different nerves,” which can cause the eyes to misalign. Of the practice’s 7,000 VH patients, Debby says around 2,000 of them have been TBI patients.

They first started working with TBI patients when they treated Physical Medicine and Rehabilitation (PM&R) Dr. Jennifer Doble for VH. Doble was initially referred to the practice through a patient of hers, and through conversations with the Feinberg’s and Dubin, she realized that some of her TBI patients had symptoms of VH.

“The TBI patients we see, they’ve gone through physical and occupational therapies,” Paul said, “but they still aren’t fully recovered despite their therapies.”

Doble runs a concussion clinic at St. Joseph Mercy Ann Arbor Hospital and encourages her patients to be evaluated for VH if they still experience post-concussive symptoms three months after their injury. 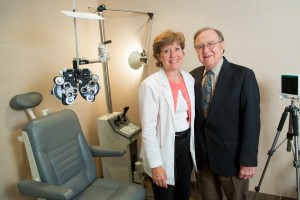 The father-daughter team has treated VH at their Bloomfield Hills practice for 19 years.

Aside from Roy and another doctor from the 1800s, there is no scientific research on VH, but Debby, Paul, Dubin, Doble and Mark Rosner are working to change that. “This is just a private practice,” said Mark, who is not part of the practice, but of the VH research team. “It’s not the University of Michigan, but we’re doing research and writing articles just as they are.”

Two statisticians have validated Debby’s questionnaire, which has evolved over the past 17 years — one from U-M and one from St. Joseph Mercy Hospital of Ann Arbor. The team plans for it to be published in conjunction with an article in the near future.

Recently, they presented posters with broad summaries of their research findings, “snapshots” as Debby called them, at the International Brain Injury Conference in Scotland in March, the Anxiety Disorder Association Conference in Virginia in April, and the American Headache Society Conference in Los Angeles in June.

“Before people can write papers, they do posters,” explained Debby. Doble, Debby, Mark and Arthur did write a paper on VH and TBI that was published in the peer-reviewed PM&R Journal in April 2010.

Members of the team also have spoken at conferences around the country and world. Arthur Rosner recently spoke at a conference on dizziness in Stockholm and lectured at the University of Edinburgh in Scotland.

In May, Debby was invited to speak to doctors at Johns Hopkins University by Dr. John Carey, who she refers patients to if they have an ear-related dizziness. She spoke to 17 doctors — ENTs, neurologists, ophthalmologists — none of whom had heard of vertical heterophoria.

“The most important event is when Dr. Doble and I present 17 years of research to colleagues at the EastWest Eye Conference in October,” Debby said. “They’ll think it’s a little unusual. I’m anticipating they’ll say, ‘Really? Prisms like that?’”

The ultimate goal for the team is to receive a National Institute of Health grant so they are able to fund a research project with a true double-blind study with hundreds of patients. “We’re doing an in-office double-blind study currently, but it’s not to the scale that we really need,” Debby explained.